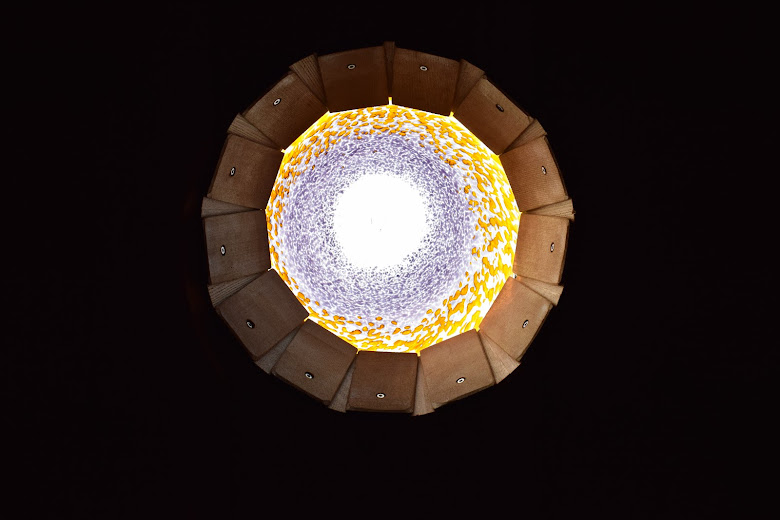 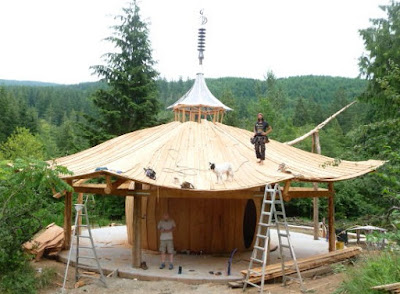 From forth the pages of Lloyd Kahn's volumes, SunRay Kelley entered into my life.  The french Carpenter Yogan visited my home during his west coast adventure and told me a tale of an earth dome he had built with SunRay Kelley.  Months later I was talking with a carpenter from Zyl Vardos  and he mentioned that SunRay had left a note on Zyl's facebook page.  The note complemented Zyl's curvaceous designs.  I took it upon myself to follow down the rabbit hole and I contacted SunRay with the intention of visiting to see his work.

SunRay returned my online inquiry with a brief email and a phone number, so after a short chat we made plans for a visit.  When I arrived he gave a brief introduction and skeptical inquiry of my east coast upbringing, then informed me he had to do a dump run and pick up fire wood.  I tied down piles of garbage to the truck rack of his Toyota and off we went, only to return with an equally disproportionate load of firewood, Fir and Madrone.  We walked around the homestead and delivered tractor bucket loads of wood to hungry wood stoves and fireplaces.  Its constant work to keep the buildings warm during the downpours and gusty blows of Northwest winters. The guy burns a lot of wood.

I asked questions at every opportunity igniting stories of his life, and stories of his buildings' lives.  After years of imagining these structures from the pages of Lloyd Kahn's books, they took form and I had the mad scientist himself as a narrator.  SunRay slowly answered all my questions with a sincere and beautiful honesty.  Electricity flowed through me during the conversations as I was propelled beyond what I thought was possible to what I was seeing as possible.  SunRay's lapped cedar technique allowed curves that plywood sheeting will not.  A mesh of Gaudi, an old logger and Ken Kesey on the forest planet of Endor.

Months later SunRay told me about a new building.  Another cedar dome with a 42 foot timber framed yurt around the dome.  I wanted to be a part of the process however I could, and I had aspirations to collaborate as an artisan.  SunRay made it clear that I could help on the project so I began the journey of navigating the I-5, back and forth from Olympia to north of Seattle every few days, dancing between my job installing photovoltaics and the project with SunRay.

First we put in form boards, ran electrical, installed plumbing and radiant heat floors.  Then we layed out the 9 posts and poured the concrete pad. 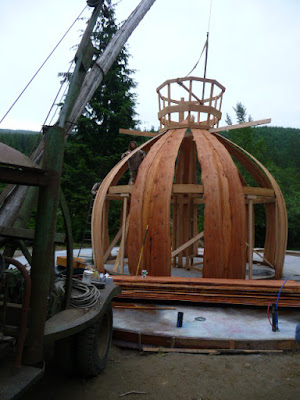 Next a scaffold was built inside the dome.  The three sided scaffold had a mid level that supports the middle tension ring and the cupola was lifted and secured at the top of the scaffold.  The boards of the dome were bent from the cupola around the tension ring and fasten to the bottom ring. 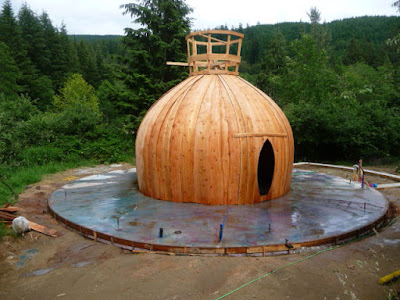 We finished lapping and bending the 1/2" thick live edge cedar boards.  The building looks like a viking ship version of Cinderella's carriage or a giant wood acorn squash.  The function of the dome is a yoga studio and a place to center one's self.  The curves of the cedar encourage warm and harmonious auditory reverberations.  This place is an om vortex. 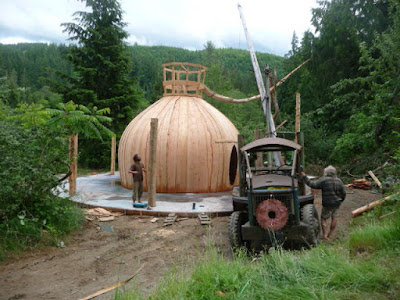 We set the posts and notched the timber ring on a Saturday, then we set a few rafters on Sunday.  I had to go back to work, so SunRay and his apprentices finished the rafters with a larger boom lift. 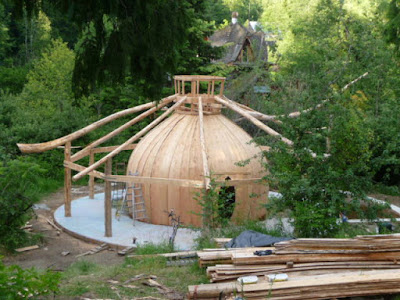 I had been thinking a lot about spire on the top of the Harbin Hot Springs Temple and imagining what the cupola would look like on this building.  The spire on the Harbin Temple had a large copper ball on top with 108 spikes protruding from the ball.  Below the ball were three flared cones of increasing size.  I loved it's look and I encouraged the idea of copper.

I asked SunRay about his plans for the spire. He gave a brief description of what he was thinking and I started sketching ideas.  I shared some ideas, most of which SunRay did not like.  He was set on steel and he wanted to use 7 big discs off of a disc tiller, with a bowling ball as a cherry on top. Not exactly what I was imagining, but I thought lets draw some designs and see where it takes us.  I questioned about leverage on the spire and how to brace it, then I went home with my mind full of ideas.

Each time I drove home my mind was humming with the excitement and absurdity of childhood grandeur.  I would grab Seattle coffee and tell tales to my friend John Reese in the U district.  I would rap as long as I could keep his eye contact in between spouts of conga drums.

On my next trip back, SunRay was interested in one of my ideas!  He liked the 9 part lotus petal flashing.  He was also keen to the bracing ideas and how to transfer the load from the spire to the top plate of the cupola.  We came up with a design for three brackets and returned to Olympia to fab them in my shop.  With the aid of the some Olympia metal smiths we bent the fish shaped brackets in the evenings of the long summer solstice days.  That weekend I was back at the building site with the brackets in hand. 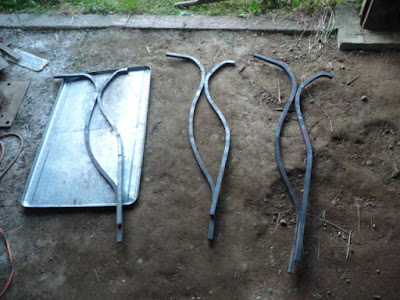 I welded the brackets on the spire and talked to SunRay about changing the design on the spire from lotus petals to a similar shape, a Northern Flicker tail feather.  SunRay was open to the shape.  The following morning I walked to SunRay's treehouse from my van, only to find an injured bird on his porch.  The bird had flown into the window and hurt it's wing.  I walked up to the bird slowly and sure enough it was an adolescent Northern Red Flicker, which is a native Washington woodpecker.  SunRay said, "Holy shit, it's a sign" and we set the docile animal on a table and drew it's tail feathers.  The design changed from seeing the birds actual feathers.  The woodpecker hung out with me for a few hours, jumping on my shoulder and head.  After a berry and peach meal we released it back into the woods and went to work on the Flicker tail feather flashing piece. 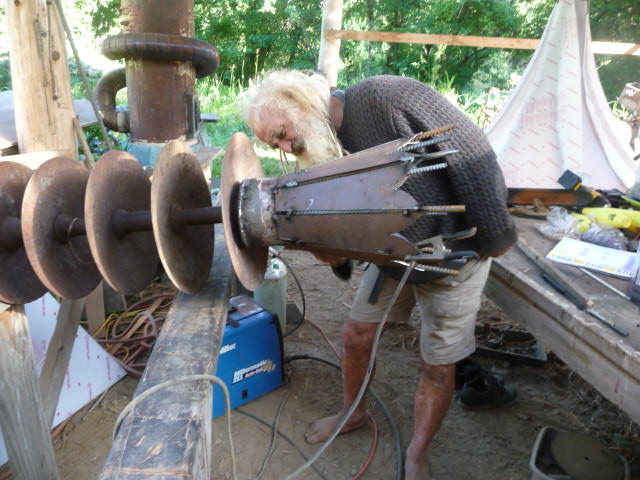 We used a metal shim and rare earth magnets to mock up and weld the re-bar spikes.  Then we cut out the sheet metal pieces with a shear.  I welded it all together then set up my anvil and forge under the massive timber roof of SunRay's shop.  I used the anvil to flare the ends of the tail feathers. 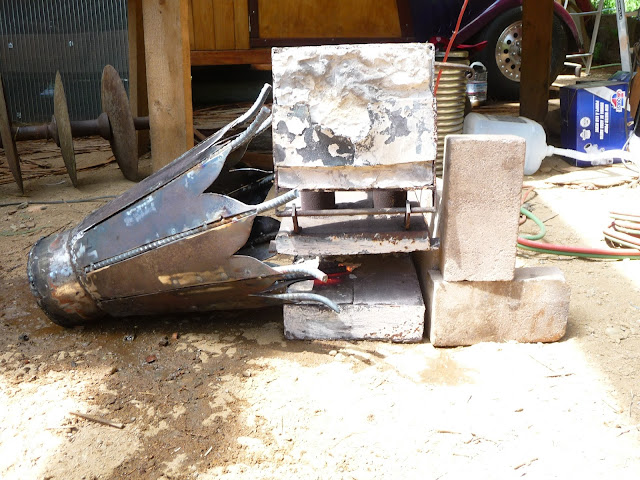 With the spire parts ready, it was time to assemble it.  SunRay's friend Bonnie purchased a metal kinetic sculpture with two spheres and SunRay liked the idea of using it for the top of the spire.  It was more dynamic and lighter than the bowling ball idea. We mocked it up and took it to the building site.  I went home exhausted and uncomfortable.  I had sun burn from my welder and SunRay's eyes were very sensitive from glancing too many times at the welding flashes.

I had to come back for the flying of the coop, so once again after a few days of work, I returned.  The cupola spire went up almost flawlessly.  It sat a little off kilter so SunRay blocked the top plate with long shims to adjust it.  We bolted it down and continued on to the roof sheeting. 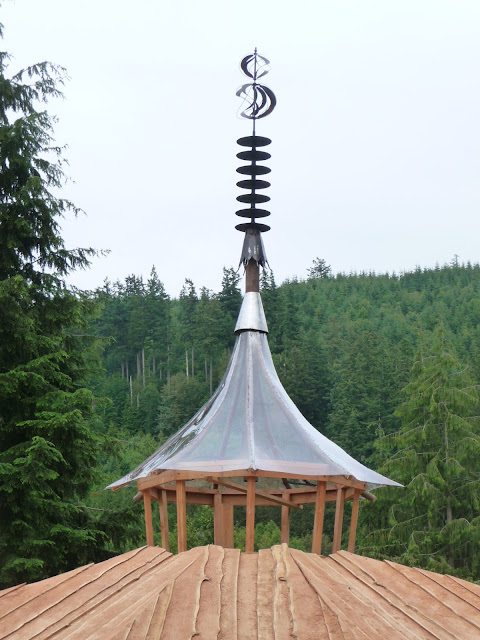 With the completion of the spire my days are less riddled with Seattle traffic, but my nights are still filled with the whimsical whisperings of Mother Nature's designs.  I am so grateful for the time I spent with SunRay and his team and my contribution to this beautiful building. I step onto the pages of the books that have nourished my aesthetics and inspired my work. 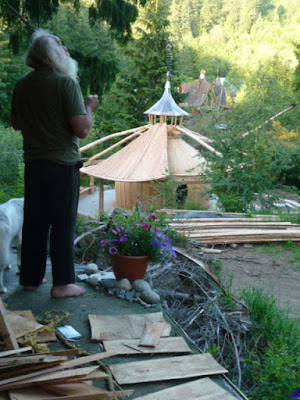 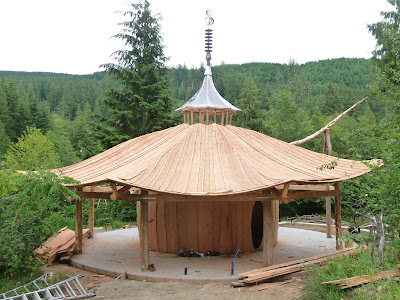 Posted by Pairoducks at 8:21 PM

the Hundred Handed Ones